The history of EZOCM JSC formation is inextricably connected with the formation of the precious metals industry in Russia.

Gold mining in the South Urals at the beginning of the 20th century. EZOCM photo archive

In 2017, the Central Analytical Laboratory of EZOCM JSC has been granted the right to perform proficiency testing of the laboratories of Russian precious metals producers (ILC). EZOCM made it to the top ten major exporters of the Sverdlovsk Region according to the Expert Magazine.

In 2016, EZOCM JSC successfully passed the audit procedure of the London Bullion Market Association (LBMA) checking for compliance with the LBMA Responsible Gold Guidance and secured accreditation for competence of reference material producers pursuant to the requirements of the international standard ISO Guide 34: 2009 “General Requirements for the Competence of Reference Material Producers”.In 2016, the Central Analytical Laboratory of EZOCM JSC took part in the world-wide professional testing conducted by one of the most authoritative coordinators of inter-laboratory research in the world, the British organization FAPAS commissioned by the London Bullion Market Association (LBMA). The result proved to be significant. LBMA confirmed a high standard of professionalism demonstrated by the employees of the Central Analytical Laboratory of EZOCM JSC.In 2016, EZOCM JSC started up a high technology plasma melting shop designed for processing and refinement of technogenic raw material with an extremely low content of precious metals.For the first time in the plant’s history, it made it to the TOP 500 largest Russian companies according to the RBC magazine. This year the plant celebrated the centenary of its establishment. In 2016, the international group of companies was set up based on the EZOCM JSC facilities to unite major producers of precious metals all over the world under the PLAURUM brand. In 2016, between November 14 and 18, EZOCM JSC hosted the 21st International Chernyaev Conference on Chemistry, Analysis and Technology of Platinum Metals. The topic of the conference focused on development of chemistry, analytics and technology of platinum metals and gold, and the results of fundamental and applied studies in these areas.  The companies of PLAURUM Group started to win over the markets of the South American continent with the Brazilian market being the most promising of all these markets. The first ever business visit to Brazil in the history of the Group took place during the period from December 12 through December 16, 2016 following the first delivery of high value added products to cater for the needs of this country’s nuclear power sector.In 2016, for the first time in its track record EZOCM supplied woven gauzes for chemical plants in Canada, and commenced sales of high value added products to such countries as Hong Kong, Lichtenstein, Uzbekistan and Japan.

In 2015, the first catalyst system was supplied to the far abroad. A nitrogen producer in Turkey was delivered the first catalyst system. Also a trade contract was signed with another foreign company for supply of woven gauzes. In 2015, EZOCM JSC, for the fifth time, developed and introduced the output standards for products resulting from precious metals processing imported into the Russian Federation to be processed from those countries which are not members of the Customs Union within the framework of the Eurasian Economic Union under the customs procedure for processing in the customs territory (Director General’s Order No. 450 dated 22.07.2015). The output standards for the products resulting from precious metals processing have been the exclusive product of EZOCM JSC for more than 12 years since there are no other company in Russia that is the author or holder of similar standards. The standards were successfully approved by: the Ural State Inspectorate for Assay Supervision (19.03.2015), Assay Chamber of Russia Federal State Institution (10.06.2015), Administrative Department of the Finance Ministry of the Russian Federation (01.07.2015), Deputy Minister of Finance of the Russian Federation (13.07.2015). The standards are effective from 01.03.2015 through 28.02.2018.

July 2015 saw the commissioning of the assay test laboratory.During 2015, EZOCM JSC improved on its rankings in the TOP ratings of major Ural exporters which are annually prepared by the Expert Ural Analytical Center. In the ranking of 100 major Urals and Western Siberia exporters, the company climbed up to the 166th position. At the same time, EZOCM JSC took the 9th position in the sub-ranking TOP 20 of the most vibrant companies having made it to the top ten.

The Central Analytical Laboratory of EZOCM JSC won the annual competition “2013 Best Test Laboratories in Russia” organized by the All-Russia Quality Organization.Based on the year 2013 results, EZOCM JSC ranked 33rd in the rating of 100 major Urals and Siberia exporters according to Expert Ural magazine. Also, the Expert Ural analytical center rated the plant among the top 20 most profitable companies in the region.Success achieved by EZOCM JSC in the international market was twice highlighted in the course of the annual regional competition of industry and innovations «Achievement - 2013» and “Achievement - 2014” where it won the «Global Market» («Best Exporter») nomination. In 2013-2014, 167 new products were designed. One of the technological achievements of the year 2013 is the unique unit for processing «poor» waste of extraction operations (reextraction of precious metals from them). In 2014, the company, for the first time, presented to major global companies its own innovative technology for vacuum distillation of silver from gold-silver alloys as well as the respective equipment designed together with the Italian company IKOI Srl unipersonale. The Central Analytical Laboratory was awarded the «Silver Mole» prize instituted by the «Analitica» Association of Analytical Centers.

August 2012 The first step towards entering prospective Kazakhstan market was made. On August 20th JSC “EZOCM” organizes a roundtable discussion in Astana devoted to Processing of Precious Metals which includes the presentation of the plant and its capabilities with respect to prospective customers and partners – the companies in mining industry of Republic of Kazakhstan.

September 2012 LLC “EZOCM–Engineering” gains the status of the Resident of Skolkovo Community and the opportunity for scientific and advisory support of their projects by Skolkovo Foundation.

January 2013 During the year EZOCM designed 77 new types of products relating to all commodity groups (catalytic systems, glass melting devices, chemicals, technical devices, etc). Some of them are based on fundamentally new technologies developed by the company: glass feeders produced from Palladium alloys with dies of Platinum-Rhodium alloy; new catalytic systems for Ammonia oxidation process in Nitric acid production; Rhodium chloride solution and crystals (obtained by the technique of electrochemical dissolving of Rhodium powder).

The revised version the Quality policy was accepted. The London Platinum and Palladium Market confirmed status LPPM Good Delivery on platinum and palladium bars of of JSC EZOCM. 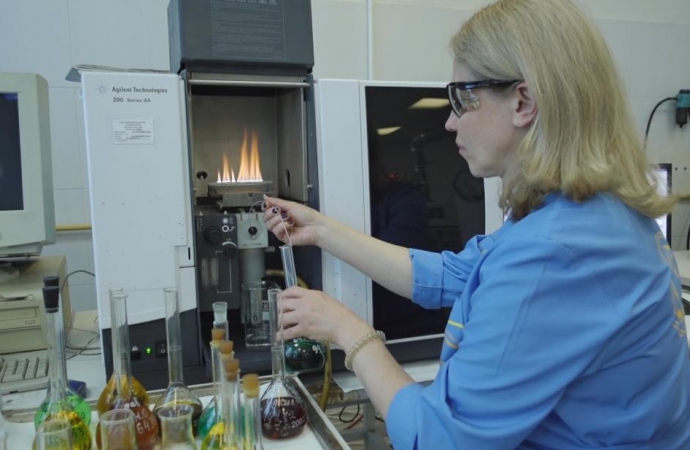 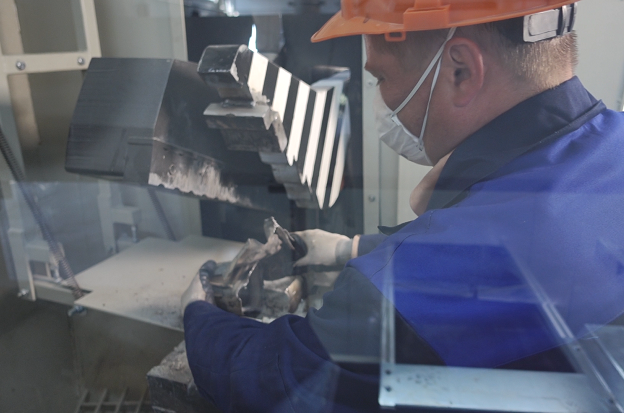 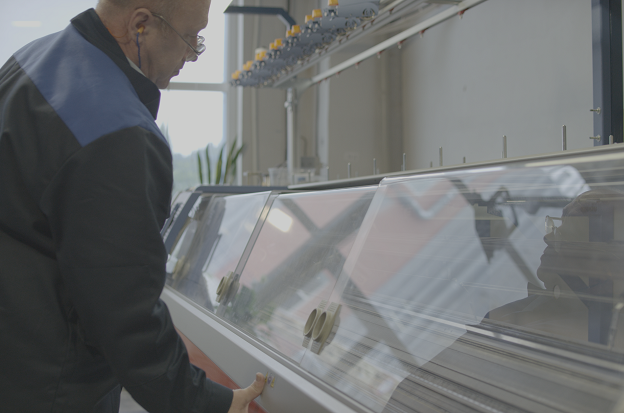 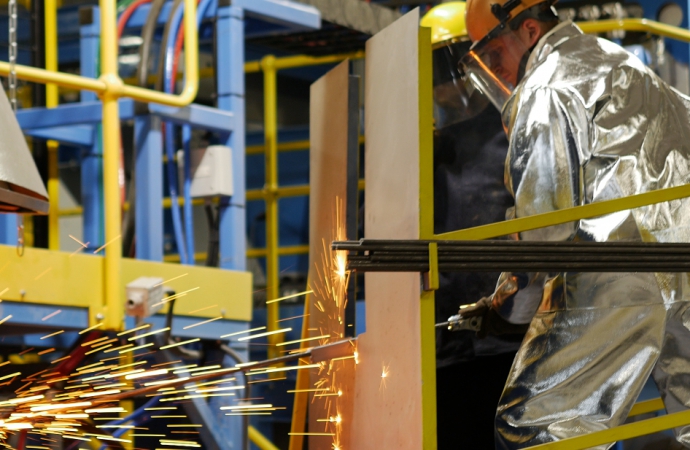 The contract with Kazakhstan head institute on designing the enterprises of non-ferrous and ferrous metallurgy, rare metal, rare earth, gold-mining, machine-building industries «Kazgiprotsvetmet» on the project of the plant metal processing facilities transfer from Ekaterinburg to Verhnajaja Pyshma came into force.

In accordance with the plant development strategy it was decided to transfer the industrial facilities of the «Ekaterinburg Non-Ferrous Metals Processing Plant» JSC  to the production site of the Ural Plant of Chemical Reagents in Verhnayaya Pyshma city.

Plant reorganization and optimization of the production processes.

The factory celebrated its 85-years anniversary. A dentistry alloy on the gold basis (85-87% Ag) had been developed.

Development of a site on slime processing, lining mass and spent catalysts in Verkhniaya Pyshma (the Urals' region). Awarding of «Good Delivery» certificates on bars of gold, silver, platinum and palladium.

Incorporation of an open joint-stock company «Ekaterinburg Non-Ferrous Metals Processing Plant». Development and introduction of an alternative managing system at the plant. The quality system for catalyst gauzes of platinum alloys had been recognized to conform to of DIN EN ISO of 9002 requirements.

Introduction of a site on slime gold processing.

After 45 years. The refinery of slime platinum was renewed (Deposit "Konder", Amur Region)

A production of measured one-kilogram bars of gold had reached 3 tons a month.

A production of fine platinum - palladium powders for electronics had reached 5 tons/year. 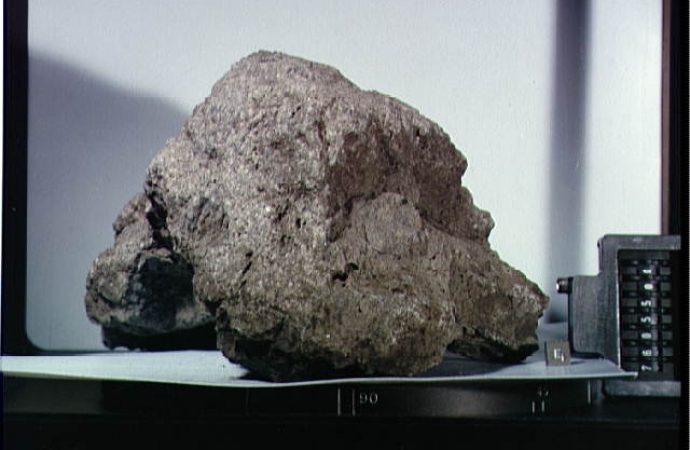 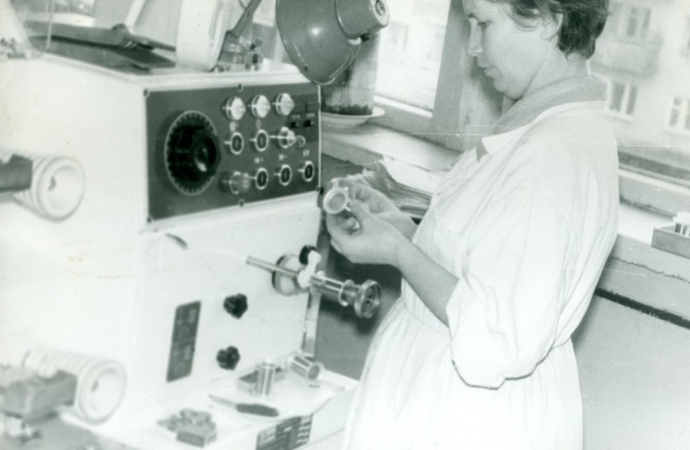 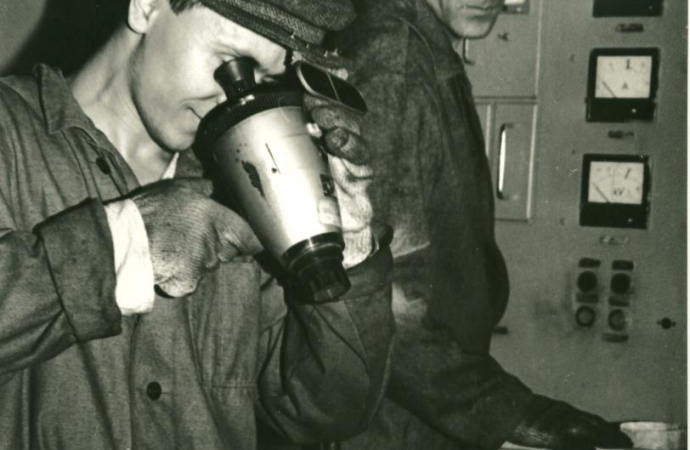 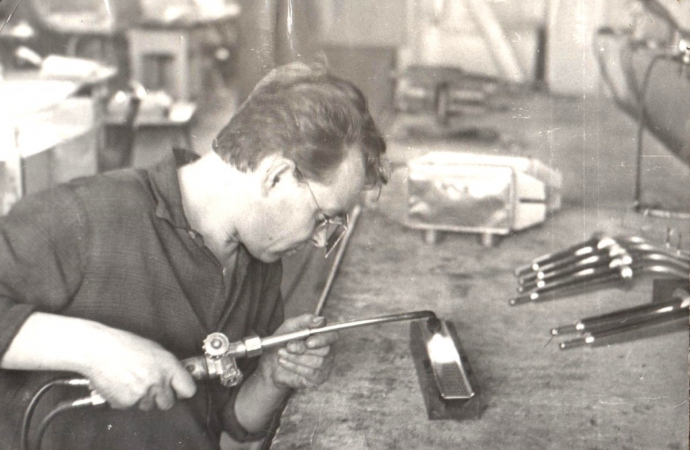 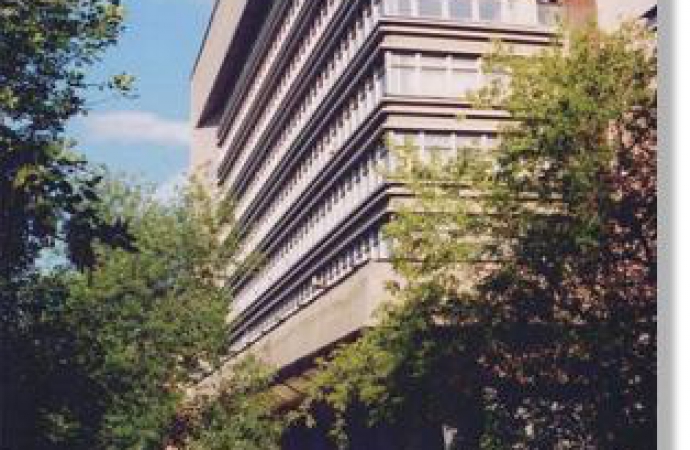 The plant building at Lenin Avenue, 8, Sverdlovsk. The 1980s

Creation of the second industrial area of the factory

The site was appointed to be the base organization for standardization of precious metals, alloys and industrial products thereof by the resolution of Gosstandart (Since 1991 - Technical committee)

Introduction of a Central laboratory of the site. Development and introduction of progressive technologies of melting, casting, welding, heat treatment, and also rolling, drawing, punching of precious metals. Production of equipment for manufacturing of fiber glass. For the first time in the USSR the methods of chemical compound of platinum alloys analysis had been introduced by a spectral method and by EMF measurement method.

An evacuation of the factory «Platinapribor» from Moscow. Manufacturing of products for defense purposes of the country. The share of metal processing had reached 77 %.

An improvement of refinery technologies; extension of products assortment.

An introduction of oxygen - hydrogen melting (1923), rolling (1925) and forging (1928); the start of platinum technical products - laboratory ware and thermocouple wire 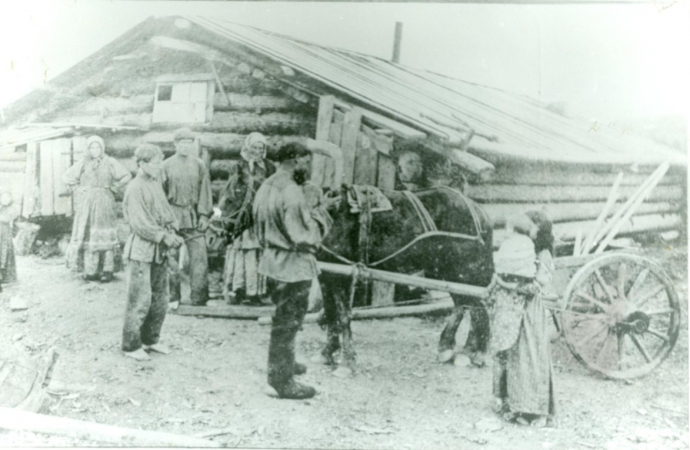 Preparations of a prospector for platinum mining 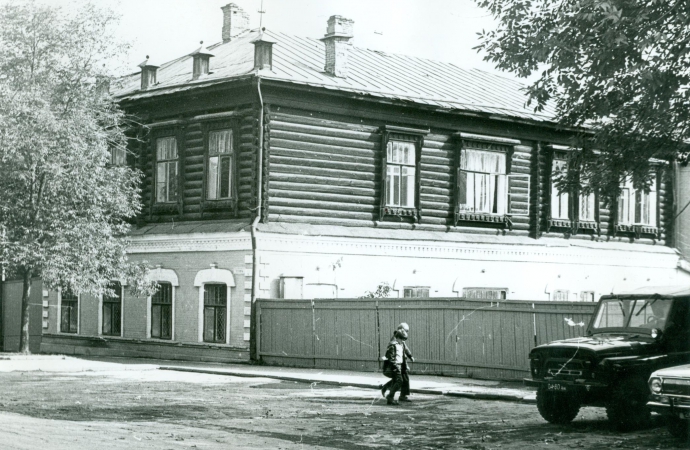 The first building of the plant management 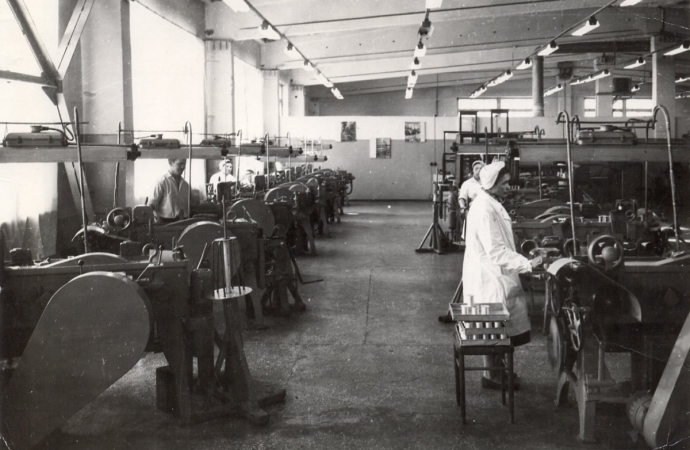 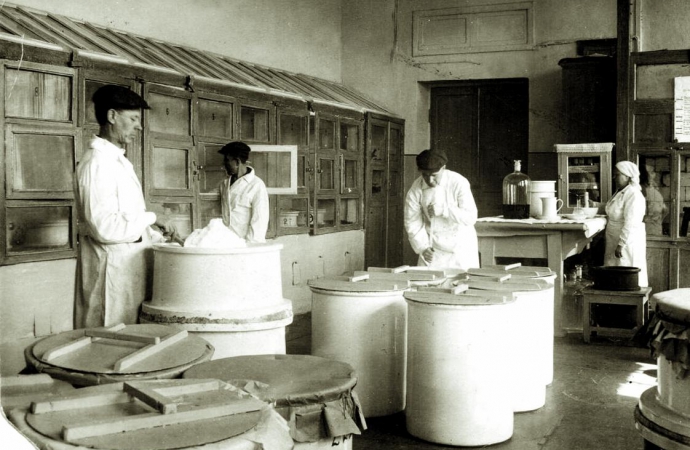 The decision on incorporation of «a private clearing factory» for refining of the Urals slime platinum in Ekaterinburg was taken by Russian Government on May 14, 1914. Nikolay Nikolaevich Baraboshkin was appointed the first Executive manager.